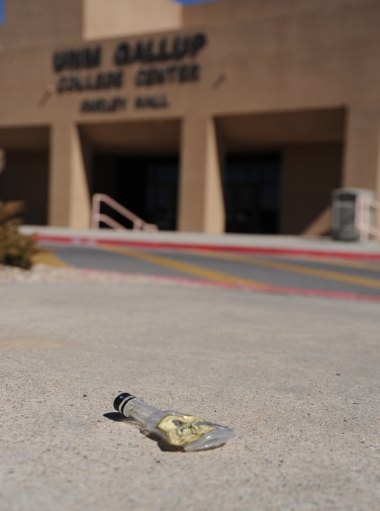 Photo By Monica Jamison
A crushed alcohol bottle just outside the doors of UNM Gallup.

To contact the Campus Police, call (505) 863-7620.GALLUP—Empty alcohol containers are frequently found at UNM in trash bins, bathrooms and other places around campus, said UNM Gallup Police Sergeant Richard Perez.
“Unfortunately there’s an alcohol problem on campus,” said Perez.
Although finding alcohol containers is a common occurrence on campus, Perez said, “Most intoxication calls are not students.”
Officer Perez said that six out of ten of the intoxicated people found on campus are not students.
He said there are three transit buses that stop at UNM Gallup and drop off non-students and he believes this is where the intoxicated non-students come from.
As for drugs on campus, Perez said drugs aren’t a big problem.
In the past there has been suspicions of there being drug dealers on campus and there has been undercover cops sent to find the culprits.
The last time undercover cops were sent to UNM Gallup was two years ago, said Perez.
UNM Gallup Patrolman Raymond J. Padilla said theft is the most common crime on campus.
He said, “People who carry backpacks, purses and laptops are easy targets for thieves.
“People leave their backpacks for a minute and they end up going missing.”
When it comes to weapon on campus, Padilla said they haven’t found any firearms or serious weapons at UNM Gallup, but there have been some small knives found.
Another problem on campus stems from homones.
Perez said, “Lately we’ve been having a rash of students going to the library study rooms and turning them into a make-out room.”
Perez retired after 21 years with the Gallup Police Department and has been an officer at UNM Gallup since 2006.
Officer Padilla is also retired from the Gallup Police Department and has been at UNM Gallup for 9 years.
According to Perez, the UNM Gallup Police Department treats UNM Gallup like a small city.
He said, “Like any police department we handle a wide range of calls from accidents, domestic violence, restraining orders and thefts.
“We do our best to keep this campus safe.”